I originally bought the plans from Farrier Marine in about 2006, but was not in a position to get started until Sept 2007, when I bought the first batch of materials.- fiberglass, peel-ply,release film, breather fabric and vacuum bagging film etc.

I built a 6'x8 laminating table from white furniture board panels  from the local DIY store, and a simple rack to hold the rolls.

For a project of this size, I thought it would be worth buying a new vacuum pump, although it was pretty expensive. It is one of the models sold by West System/ Wessex resins. (Actually made by Becker , Model VT 4.8 -and I am sure you could get it cheaper from another source!) 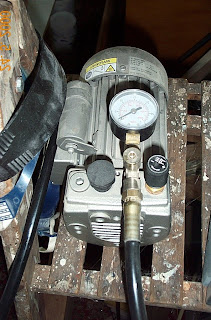 It pulls a vacuum of 25.5Hg/150mbar, which is not terribly strong, but it does however have a high capacity. (i.e it can shift a lot of air quickly)  This means that if there is a leak in the vacuum bag  ( which there often is), the pump still has some chance of pulling a half decent vacuum. So far even with some badly leaky bags I have never had less than about 24.5Hg, which is plenty strong enough to give a good laminate.

Many pumps with very high vacuums have low capacity and can be overwhelmed by leaks. I bought 2 hoses and 2 breach units, as there are 2 inlets on the pump. With the non return valves on the breach units you can do 2 bags simultaneously, adding the second later on than the first..

As working with fibreglass was new for me, I initially started off vacuum bagging the smaller bulkheads and panels individually.  This is rather a slow way to do it though, and as I got more proficient, I was able to cram as many parts as possible onto onto the laminating table. The secret is preparation, you really need everything cut to size and at hand -then there is no panic to get it together before the resin gells. 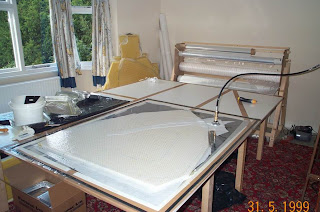 One of the smaller float bulkheads being vacuum bagged.  Rack for rolls. Some finished panels in the corner. As I do not have a resin trap between breach unit and pump, I keep the pump up on a pair of old step laders. The hoses are about 6 feet long, so I should not get resin into the pump, which would be an expensive disaster! 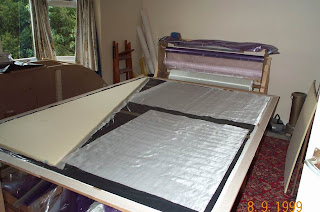 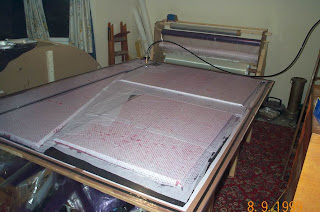