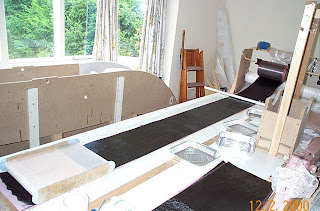 Getting ready to laminate the assembly. If you don't get the carbon UD started EXACTLY perpendicular across the assembly, each wrap will move sideways until it is falling off the assembly.. The sides  help to keep things in their right place to a certain extent. 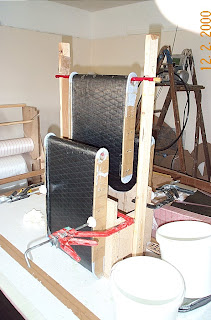 Anchors peel-plyed and drying. The longer one at the bottom will be made into the carbon anchors for the hull

Each anchor blank needs to be cut ino to 8 strips. The plans say to use a bench saw with a diamond blade, but I found my bench saw was not up to the job really. On top of this it was carving out about 5mm per cut. That would end up turning 35mm of precious anchor into dust! (There is about 20mm of anchor to spare which includes any edge defects). I opted to have them cut by abrasive water jet in the end. It was expensive but worth it, and they turned out very well. Even the foam did not get damaged by cavitation from the cutting jet.