Made using molds traced from Full size patterns and. constructed from foam strips about 25mm wide. It is hard to get them to stay in place. Beacause of the shape of the fairing, (deeper at the outer end than at the inner end) the strips need to bend backwards and forwards, up and down and twist as well. 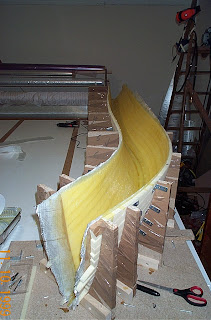 I ended up having to hot glue each strip to the lower strip and hold every strip in place with screws in every single mold!  After that  right angled brackets were used from the outside, to hold it all in place, and the screws on the inside removed before laminating. Just make sure there is enough room to get your screwdriver in to get the screws out. By the time the sides have been built up, there is not much space left inside. 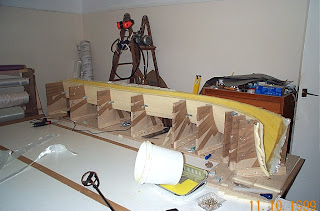 The end result is rather "gappy" on the outside. It is virtually impossible to get the strips to align nicely along their entire lengths.  I will have to try and squeeze some resin/putty into these gaps later. The shape is not that good either with a lot of ridges to be sanded. I think that there ought  be a better way to make these. It has taken a lot of time and the results are not that impressive really. (i.e you have just created more work for yourself!) 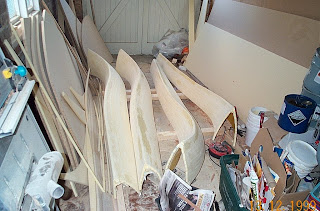 After a bit of sanding/fairing they look a bit better. Pity I forgot to put any peel ply on the inside after laminating though..


I am going to leave the beams at this stage for the moment. There is still quite a lot more to do but I am running out of space in my current workshop. Interestingly I had an update to the F-39 plans recently form Ian Farrier, and he mentioned that several builders or potential builders had enquired about purchasing ready made beams from Farrier Marine. I can certainly see the appeal of that. It is too late for me, but if I had a choice I think it would be well worth it.
Posted by Al at 08:26