After removing the laminated beams from the mold, tops need to be fitted. These are the 2 aft beams which areslightly shorter at the tip than the forward pair. 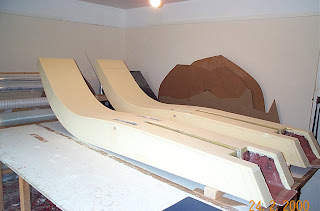 The mold for the beam tops is made from the 2 cut-off from the beam mold itself. i.e the opoosite curve
I thought I would vacuum bag these as it only needs a small alteration to the mold to give a flat surface. 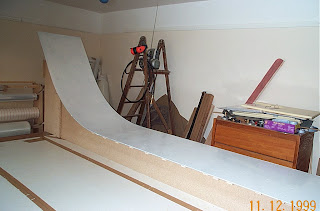 The mold is just made from slats running from side to side. I added this piece of 6mm ply to give a surface to bag on. 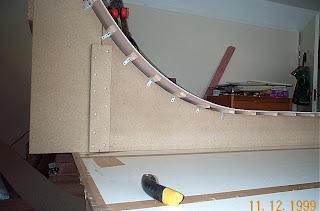 To hold it in place a few  right-angled brackets were needed around the curve. Otherwise the slats were pulled out of the chipboard sides. 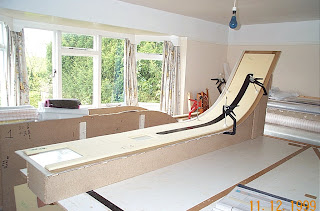 Positioning the foam. The black tape is covering another removable strip, which will be dug out from the otherside later on. (Same as in the beam bottom.) The slits for the strip should be completely sealed with putty before laminating. The gap at the front is where the top goes over the reccess mold. The smaller rectangle higher up is where the highest part of the UFSR will go. 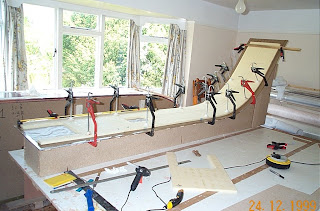 Holding the faom in position without screwing from the otherside (will lose vacuum) was a bit tricky. I ran a bead of hot glue right down the sides whilst clamped down, and this was just about enough to hold it in place. ( I did have to use some screws from underneath on the bend, but I put some hot glue down the holes before screwing them in and it did not seem to affect the vacuum too much.) 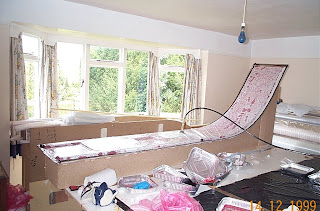 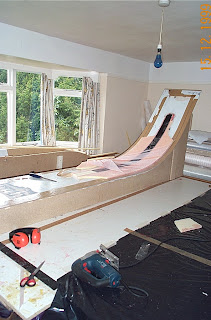 Oops ..Disaster! I did not seal the slits for the removable strip well enough and the mold itself was too rough.The resin stuck well. 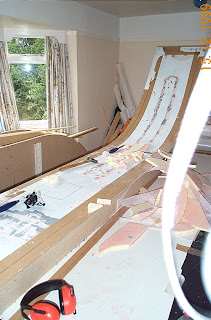 I remained fairly calm under the circumstances else there would be no photos!. I just cut it all up and quietly put it in the bin.It put up a fair old struggle before breaking considering it was less than 24hr old, Even so it is a reminder of how brittle resin can be after it is just cured. I though afterwards that it would have been more economic to smash up the mold and save the part, but it did not occur to me at the time. (So far, I'm glad to say this is the only part I have completely wrecked. I hope it will be the last as well!) 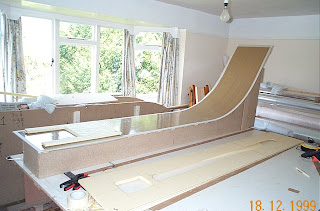 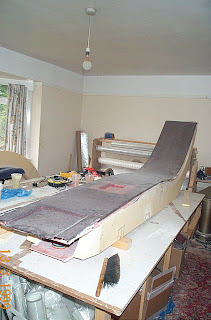