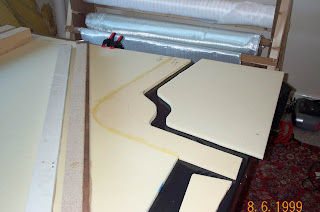 Before laminating the panels for the beam bulkheads, a high density insert is added around the area which will later be cutout.to form the mold for laminating over. 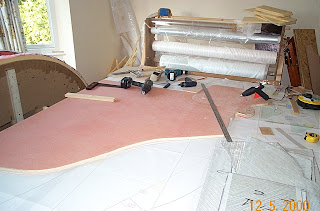 Checking the shape of the prelaminated panel against the Full size patterns. It is very important that the cutout goes back into the exact spot it came from, to which end there are two "ears" on both the cutout and the bulkhead panel.. 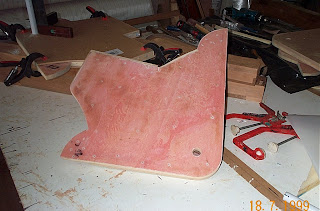 One off the  bulkhead cut out sections. The small hole is the where the stainless steel pivot pin will go later to attach the strut to the bulkhead. The idea here is that the cutout section has spacer plates added either side of it before being reattached to the bulkhead using the "ears" on the cutout. Then it is laminated over either side, before being removed, leaving a slot into which the Upper Folding Strut will pass. 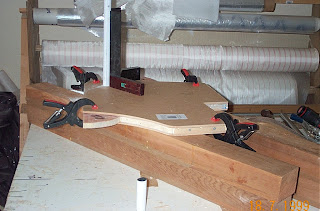 Adding the spacers either side of the cut out section. The  white tube and set squares are an attempt to keep all the holes in all the layers correctly aligned, ie perpendicular to the mold. Spacer are MDF sheet . 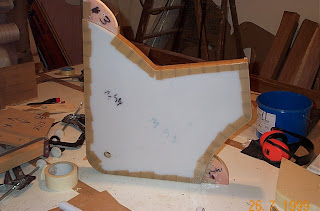 Cut out has to be made resin proof, to which end I added UHMW Polyethelene sheet either side of the mold, which was held on with tape and hot glue (glue only in areas which would be accessible after lamination!.).
( "Ears" for repositioning on the bulkhead obviously not covered which plastic).

When it came to getting the mold out of the slot it would only be a matter of slitting the tape and breaking the hot glue seal, and the centre section (cutout plus MDF) would pull out leaving the plastic spacers inside the slot which could then be collapsed inward and pulled out easily.

The above worked well except for one disasterous unforseen problem. The plans say to use 8/10mm plstic spacers, but I thought why not use 6mm MDF and 2mm plastic spacers!  The problem is that when there is a temperature differential between the two sides of a thin piece of plastic it  basically starts to bulge out and distort. With 8 layers of laminate to go over the cutout area, the heat from the curing resin caused the loosely attached plastic sides of the mold to bulge out and distort, which was a serious problem, not least because the carefully position G10 tube would also move (with the plastic sides)  and lead to misalignment. All 4 molds were constructed in the same way and where all attached to the bulkheads and glued and screwed in position. They could not be removed without wrecking them. It turned out to be a real headache!

With Ian's advice I got around this problem in the end by lamintaing individual layers on in a cool room using my slow hardener which generates very little exotherm. After the first 3 layers where cured, they where sufficiently strong to stop the plastic sheet from moving.  But it was a real pain and dragged out what should have been a straightforward laminating job into several weeks of frustration and agro including some midnight laminating sessions in a chilly room! But there you are, how many times have you been told to "FOLLOW THE PLANS!" . So if the plans say use 8/10mm spacer, you had better do it!


Adding the flanges to the cutout section 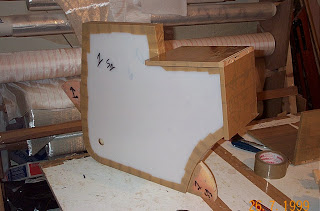