Starting on the Main hull

I finally found a suitable space to rent to construct the hull and floats.  Continuing my back to front build, I have decided to get started on the main hull and leave the floats till later. 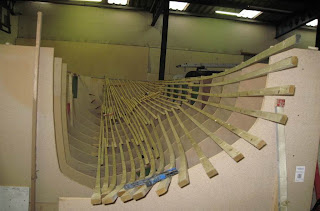 Form frames and battens. I made the chipboard form frames some time ago and found that they have all done a little bit of warping/twisting/splaying, and being generally unhelpfull. They are also in 2 parts as the 4'x8' sheets on their own are not tall enough. I have added extra height on some bottoms, and some have extensions on the tops. I have had to spend a lot of time geting them back to upright, flat, sqaure etc. 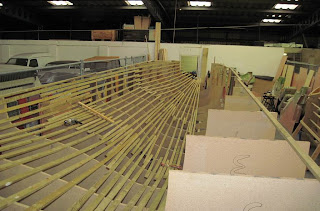 If I ever did this again, I think I would avoid using chipboard. It is heavy, brittle and prone to distorting. Any money I saved by using this rather than MDF, has probably been spent on expensive jigsaw blades to cut the stuff!  Beginning of the planking 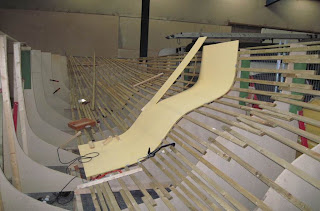 I have copied Henny's (fram.nl) method of using battens to temporarily hold the foam rather than clamps but with the addition of a small block on the batten to keep the edges butted up tight together. 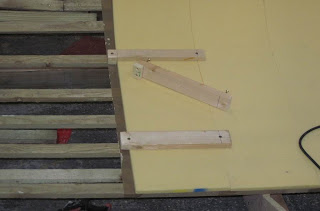 I have opted for 9' wide strips, -it does mean a lot of strips to fit, and many seams to be filled, but I found it quicker to thermoform and fit this size rather than struggle with wider pieces. If you give the foam too much heating it tends to expand and distort. I give it just enough to take out the stress and relax enough for the screws to hold it well from behind. 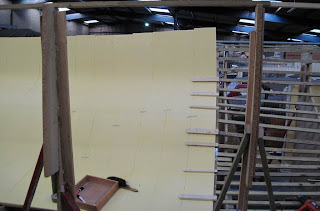