I am using a similar arrangement as before, but with an additional 60W bulb. 6 in total. Could really have done with 7 to speed up the process and produce some extra heat. 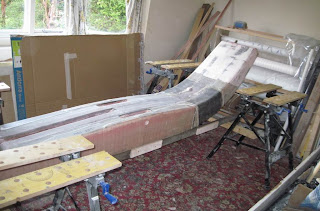 Bearing in mind that there is 60/70Kg of resin and glass in the beams, it is going to be a slow process to heat them up to 50C. There are 25 plus layers of carbon and glass in places, and the heat is going to take a long time to reach everywhere. 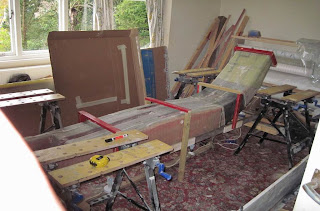 I wanted the hot air to be able to circulate all around the beam, hence the side struts to lift up the cardboard. 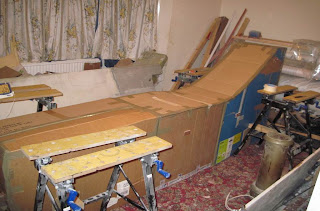 Cardboard creation. Unfortunately the heat loss from this was too much, and I had to add a lot of blankets and some old rugs to keep the heat in. Coud have done with another bulb, but would exceed my dimmer switch wattage rating.. 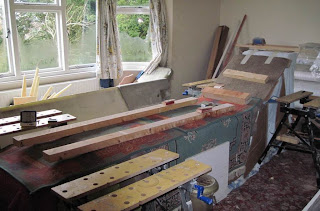 Initially the heat distribution was rather poor. The hot air was trapped underneath the beam by the sides of the ladder,  and was not getting up to the top surface well (15C difference between top and bottom). I had to add 2 small hot air/cool blower fans (8.99 GBP - Amazon!)  in at each end to circulate the air better. 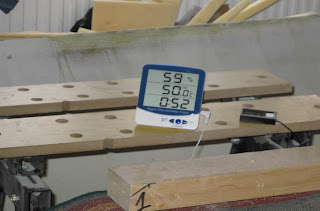 Finally getting up to temp after about 36 hours! The light bulb method is v slow for a big heavy part like this, but on the other hand you do not have to worry about it all going ballistic and frying the thing while you are away.  I think the maximum heat you can get from this arrangement with no heat losses would probably be about 60C, which would not do any damage.
Posted by Al at 04:49