I thought it would be worthwhile to make a composite quadrant for the steering. (10 inch radius). The one specified in the plans is available, but costs about 150GBP, - has to be adapted and is a lump of bronze weighing about 5Kg! It is a standard quadrant for a pull/pull chain and wire steering system 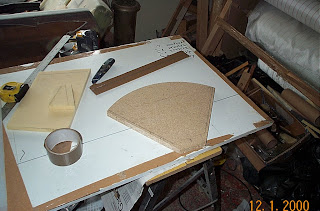 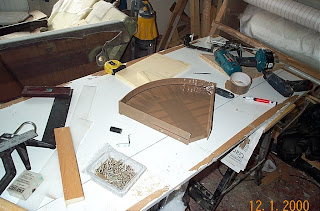 The intention was to have a thick flange around the curve and then carve the slots for the wire into this. A thinner flange down the sides for extra strength. . I will make 2 pieces like this then glue them together. I thought of trying to mold the slots in while making it, but even with vacuum bagging I don't think the carbon would have gone into that sort of  shape. 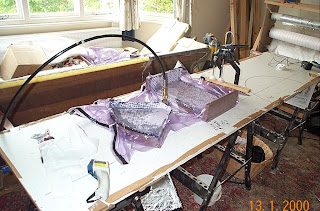 Bagging the carbon. Also making a composite quadrant shelf for the sheave idler. 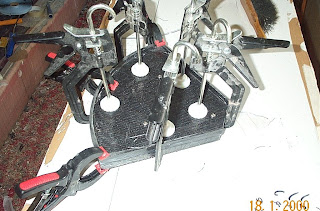 Glueing up the two halves 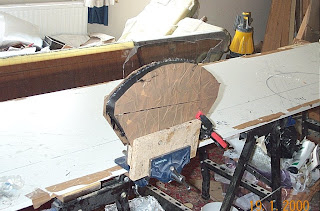 The flange at the front turned out not to be thick enough for both the wire and a deep enough  slot to stop it slipping out.  I had to add some more layers around the curve to compensate for this. Also thickened up the corners, this will allow a larger radius for the wire to go around to the fixings. (Less stress on the wire) The wires will run against the original piece, and the extra layers will just be to allow for a 8mm or so slot. to keep them in position. 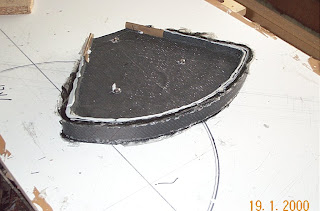 Extra layers around the curve and corners. Needs the slots cutting in for the wire , and some fixings for the tentioners to be added on each side 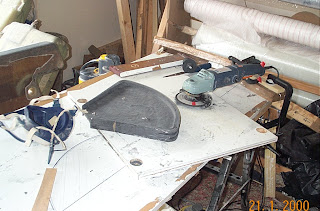 Cutting slots with an angle grinder. Crude but effective. The blade was not thick enough for the slots I wanted, but after cutting the initial slot it is easy to widen it a little by just slightly angling the grinder off the horizontal. 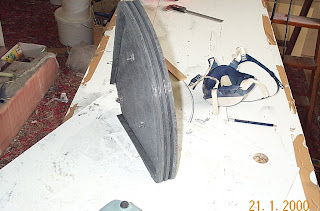 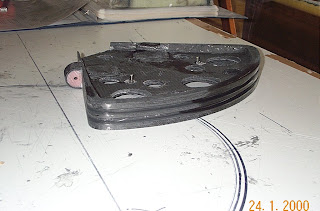 Side terminaters  for the wire bonded on. 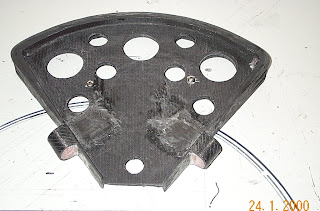 Finished. The weight with the lightening holes is 1.1Kg, which is a good saving (4Kg) on the weight of the bronze one I could have used..  A sleeve will be bonded into the centre of the quadrant  later which attaches to the sleeve/cassette in which the pull up daggerboard rudder blade is held.

I am begining to wonder if the carbon fiber will be eroded away by the constant motion of the wires in the grooves.( It is not very abbrasion reistant unfortunately)  It may be neccessary to fill in the slots with a high density resin putty and then recut them!. I had a comment suggesting using Dyneema (synthetic rigging rope?), instead of wire, -this is a possibility I guess as long as the rope does not get to abbraded in the conduits which will lead from the steering pedestal to the quadrant. Rope would certainly be less damaging to the carbon fibre.
Posted by Al at 02:21