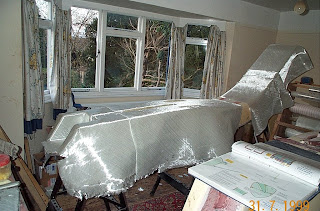 After fitting the lids, the entire beam needs to be "wrapped" in 2 layers of fiberglass. This has proved to be the hardest task so far, it is partly a physical problem (beam is heavy and awkward to move), and partly a problem of how to "wrap" a curved object in flat cloth, without distortion. As you need access to the recess mould and folding system slots, it ideally needs to be upside down. You also need access all the way around, and yet need to support it. 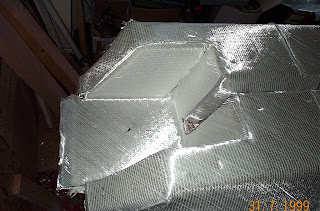 Dry fitting the cloth in the reccess mould 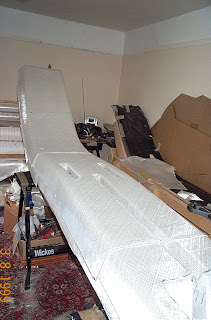 and folding system slots (Actually I  found later that it is easier to cut the slots when the cloth is wet, otherwise it tends to start falling apart.)


I originally intended to try and do it in one shot, but as the top photo shows, this would involve upside down laminating, and having to move the tressels as you go along. In fact you have to cut the cloth so that the overlaps are in positions where you can move the tressels without the beam overbalancing. The alternative is to have to turn over a wet sticky beam half way through laminating, something I wished to avoid. I tried putting  it on its side, but it was not very stable, and the cloth around the curved area seems to distort more. 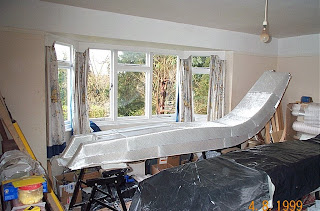 In the end I opted to do it in two stages.  Bottom and side overlaps in one stage, and then when dry, turn over and do the top and side overlaps. That way there is no need to move tressels or turn the thing over.The only downside is that because I need to do this wrap 2 times on each beam ( once before the carbon UD and once afterwards ) I shall have to do this lamination 16 times in total! 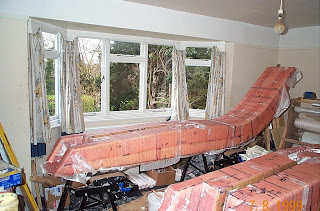 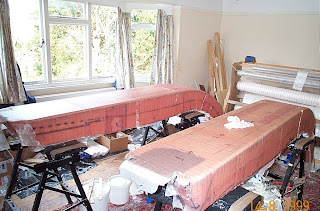 and tops. Now ready for the Carbon UD top and bottom 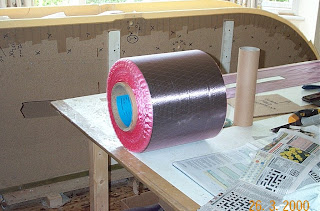 250lm of Carbon UD. Expensive and really quite heavy. I don't find it particularly easy to work with in practice. The fibres are very densely packed.  It is slow to wet out and very difficult to to remove trapped air unless you over saturate it with resin. You can chase bubbles around endlessly. Also if you inadvertently snag a strand on something sharp, you quickly end up with a "bad hair day". 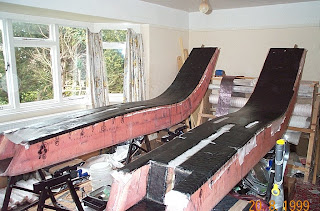 FWD Beam bottoms finished. These are probably the hardest to do. There are XX layers on each, plus all the slots to be cut out. It is difficult to get the cloth in the right position first go. If you try and pull it off for a second attempt, it will unhelpfully pull up the layer underneath and start distorting. With so many layers I have used the slow hardener, to avoid heat build up, but it will have to be postcured at a later date. I am glad that the  Aft beams are shorter overall and have fewer layers! 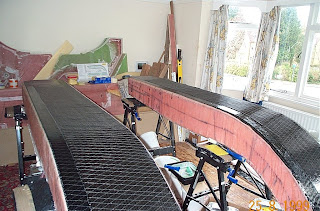 Laminating Carbon UD on the tops 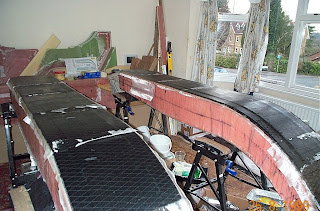 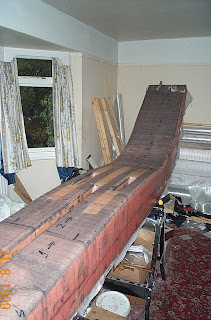 Final wrap of fibreglass over the entire beam. Nearly there . Just some extra layers over the sides to do, then finished for now. Beam fairing will be added later after checking the folding system alignment when beams are attached to the hull. 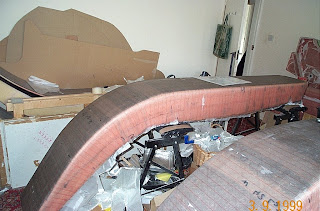 a
I have to say that the beams are dissapointingly heavy, (but very solid!) With one across the tressels as above, I can lift the tip end up a few inches with one hand, but the overall weight must be in the 50/60Kg area I would guess. This will make folding/unfolding harder work I think.

I know that a finished F-32 beam with fairing weighs in at about 28Kg, and that according to an email I had from Ian about ready made F-39 beams, that they are " much bigger and stronger" than the F-32 ones

I could not find the exact weight of cloth as specified for the beams and had to use one that was 50g/m2 heavier, (with resin about 100g/m2) . This particular cloth also has slightly course pattern/texture, and even though you have thouroughly wetted the fabric, you still need to add extra resin to fill the pattern/texture, otherwise it will not peel-ply well. I reckon for about 2.5Kg of fabric, I am using about 3Kg of resin/hardener, which is not really very good,- excess weight.

I did have a much nicer cloth from my supplier at one point, but was unable to get any more. It was much smoother, soaked up resin quickly, conformed well around corners and peel-plyed very easily, but fell to bits very easily.  I wish now that I had taken the trouble to track down some more of this type.

On the plus side, for the multiple layers of Carbon UD, on the tops and bottom, I managed to use a bit less than 50/50 resin/glass. Generally I find that where you are laminating multiple  layers (about 3 or more) you seem to be able to use less that the standard 50/50 ratio.

Most of the overlaps I have made, (and there are quite few) are also a bit wider than neccessary, but the 45/45 cloth I am using tends to disintegrate along the edge when you cut it,  so to be on the safe side, you end up making the overlaps bigger. But again more extra weight.

I have also foam filled the beams which has probably added about 6/7 Kg I reckon. The Carbon anchor assembly probably weighed about 6Kg, and Upper folding slot recess about the same.

As I am going to postcure the beams anyway,  I wish I had made greater use of the slow hardener, -the mixture is a lot less viscous than the standard hardener mix, there is a longer working time and I think you can use less resin overall. Vacuum bagging would have helped, but would be a very awkward and long winded task. (At a brief look at the plans,  there must be over 100 different pieces of fiberglass in a beam altogether, not all full size, but a lot to deal with all the same) . Hopefully if I vacuum bag the hull and floats this will do something to even out the overall weight of the boat. 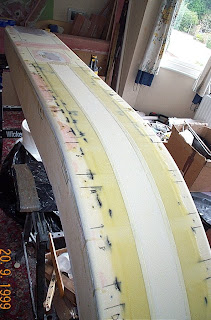 Smoothing off after replacing the "removable"  strip ( actually they all came out in about 500 small bits and I had to cut 8 new pieces of foam!)

I have gone to a lot of trouble to try and keep everything smooth and flush at each stage , otherwise you tend to get small seams and patches of  air under laminates, and it is also difficult to consolidate the layers nicely. As you add more and more  layers, you  have more overlaps and patches and a few lumps and bumps etc,  and the smoothness/flatness gets lost .It makes getting the last few small air patches/ bubbes out very difficult. Rollers and squeeges tend to miss the dips and hollows. 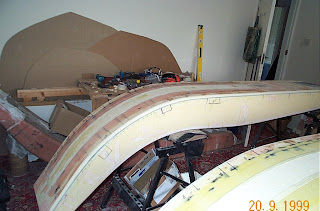 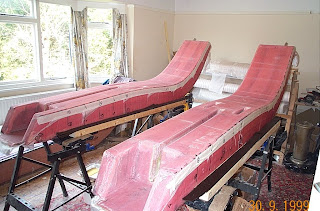 Wraped and ready for the Carbon UD - aft beams. Because I have done the "wrap" in two stages you tend to end up with a messy edge on the underside of the beam each time, drips and runs etc which need to be cleaned up before you can continue. Carbon UD layers cut to side and laid out in order. Each piece is a different length and starts from a different position. A total of  108 layers required for all 4 beams. Fortunately I only made 1 mistake which was easily rectified. 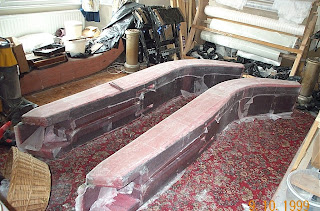 Preparing the aft beams for the extra side layers. Then all beams finished except for a few small jobs like finding the pivot pin holes again!. The Aft beams are definately lighter than the forward beams, less layers of glass and Carbon overall. It is a long haul from start to finish with the beams and it gets rather monotonous having to do the the same job 4 or 8 ( or 16) times.  I am glad they are now finished.
Posted by Al at 05:09