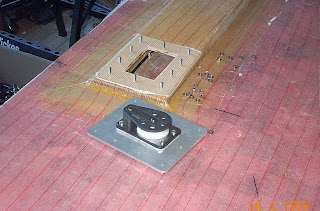 Before putting the daggerboard case sides together, I have to fit a cheek block which will be needed to lower the daggerboard. (Might be worth mentioning that the pairs of holes at the top and bottom of the Barton block, are NOT the same distance apart. I almost ruined the backing plate by not spottig this!) 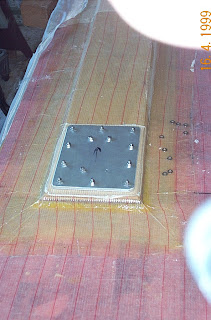 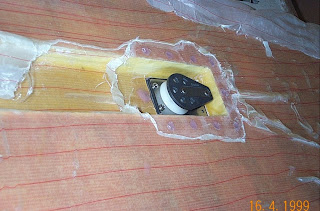 !0 bolts are neede for the plate.The bolts are pushed through from the inner side, and the heads buried in epoxy putty.


I thought I would make some of the simpler Aluminium parts myself. I have had to buy some large blacksmiths drills and some hole-saws  to make these parts, but they will also be needed later on to drill matching holes in the hull  and beambulkhead flanges.etc

Drilling Aluminium is easier than I thought, even 12mm plate was not too difficult. I already have a small pillar drill which seems up to the task. The cutting and shaping I have had to do is on a small band saw with a bi-metal blade.It is slow going to cut but still easily possible. A bench sander also rounds of corners and edges very easily. 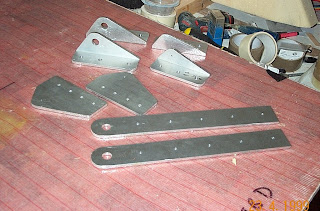 These parts  are for the kick- up rudder box. The 4 large holes will have a plastic bush fitted and then a 16mm bolt. Plans specify a 16mm ID by 19mm OD plastic bush, but I found that from Igus GMBH   (suplies acetal bushes as used in folding system) that they only have 16mm ID by 18mm OD. So I have drilled 18mm hole and not 19mm. (Could be worth checking that you can get the bush specified Before drilling hole!) 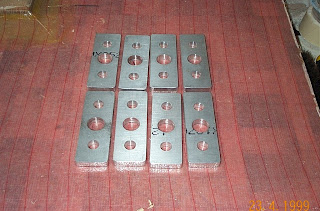 These are the beam bolt backing pads for the folding system - made from 12mm Aluminium plate.
Posted by Al at 03:01